While governments may have signalled an “end to austerity” in fiscal policy, at a local government level, local authorities across the UK have continued to experience year-on-year real-terms cuts to their budgets.

These have led to dramatic cuts to many services, and the continued reshaping and redesign of others. There is ongoing concern that citizens may unequally experience the impact of these changes.

Our research using the data held deep within the customer relationship management (CRM) system of North Lanarkshire Council provides some of the most conclusive evidence yet that justifies this concern. We found that women living in neighbourhoods with the highest levels of deprivation are most impacted – and that these impacts are multiple, and perhaps surprising.

In her influential book Invisible Women, Caroline Criado Perez alerts us to the ‘gender data gap’. She demonstrates how the knowledge gap creates “a pervasive but invisible bias with a profound effect on women’s lives”. Our project was initially conceived to examine the impacts of austerity cuts on the council-run environmental services experienced by people living in more, or less, socio-economically advantaged neighbourhoods.

A data sharing agreement between UBDC and North Lanarkshire Council gave us details of:

These data were matched to the Scottish Index of Multiple Deprivation to explore socio-spatial patterns.

However, the CRM data also gave us the ability to match the gender of those making requests. So we decided to make women visible in the data and to see what, if any, gendered patterns were in play. Such rich detail in our data allowed our analysis to go far beyond existing analyses of similar datasets – particularly from US “311” services – which rely on an entirely anonymised dataset that is publicly accessible.

The title of our open access paper, Unequal and Gendered, acts as a ‘spoiler alert’ to broadly reveal what we found: that despite the best efforts of the Council - and despite its commitment to tackling inequalities - ten years of austerity cuts to environmental services were felt most acutely by women living in poorer neighbourhoods.

Between 2010/11 and 2018/19, the budget of North Lanarkshire’s Environmental Assets Department was reduced by some 35%, in line with cuts experienced by councils across the UK. In the three years 2013-2016, there was a workforce cut of 377 full-time equivalent posts. Again in line with the strategies devised by other councils, North Lanarkshire reorganised its workforce into generic and flexible teams, invested in new labour-saving technology and, crucially, reduced programmed services while moving to a service model more reliant on reacting to ‘service requests’ from citizens and staff. Within this context, we wanted to know if the volume of service requests from citizens changed as austerity began to bite and whether there were socio-economic and gendered patterns to this. We also wanted to know if the speed of the Council’s response changed as budgets were cut and, again, if we could identify socio-economic or gendered effects.

Requests for environmental services - changes in relation to austerity cuts

Figure 1 shows the increased volume of service requests (by head of population) in North Lanarkshire in the first nine years of austerity. The red line is the rate of requests made by people living in the most disadvantaged fifth of neighbourhoods – and shows an immediate and steady rise over the period (plateauing in 2016 when some new mobile technology was deployed). The green line is the rate of requests in the most advantaged fifth of neighbourhoods. Here rates stayed largely static in the first few years of austerity, but then they rose here too – suggesting a delayed impact of austerity in better off neighbourhoods. 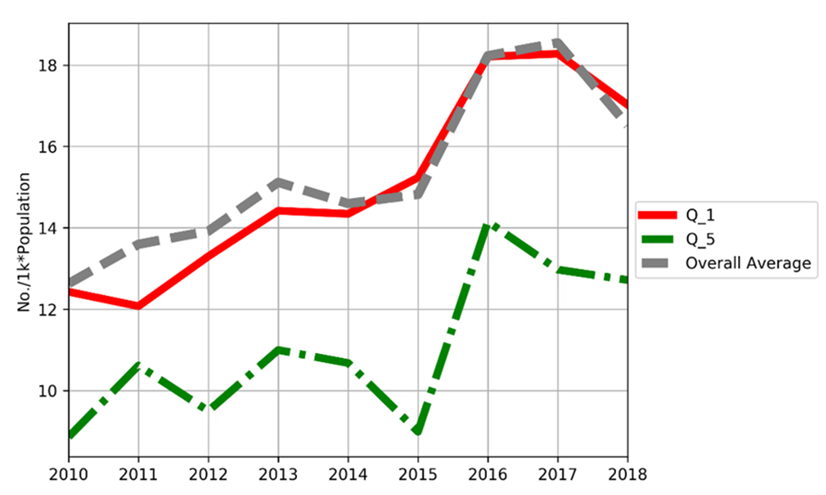 Concerning gender, women made two-thirds of service requests– a share that did not change as austerity cuts impacted. Gendered disparities were greatest with dog fouling – women made double the number of complaints made by men about this. This may reflect disproportionate responsibilities for children and the disproportionate use of pavements.

When we examine gender and deprivation together (Figure 2), this shows that women in the most deprived neighbourhoods bear an even larger share of the burden of requesting services than women in better off areas. Regression analysis confirmed this and confirmed that the burden is shared a little more equally in more advantaged neighbourhoods. We also identified a legion of ‘super-reporters’ – people who made multiple service requests over the years (between 20 and 144). All but one were women, and the large majority were from the most disadvantaged areas. 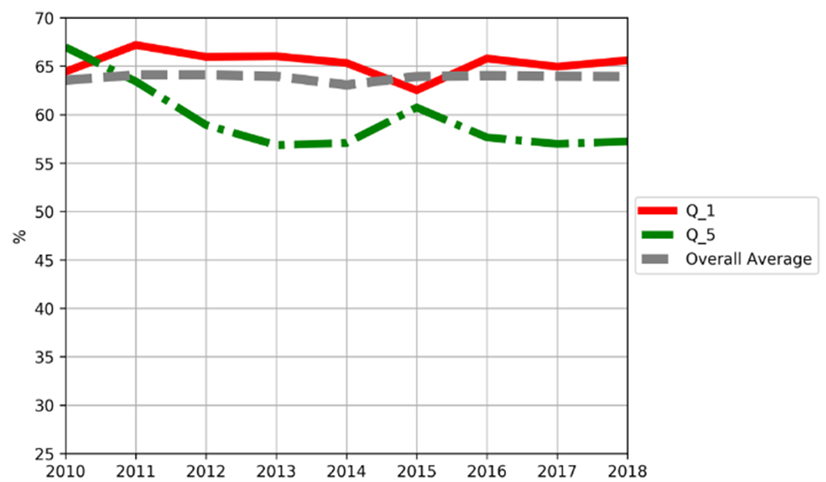 These findings resonate with wider research that looks at the roles taken on by women and men to maintain their communities: women tend to take on more of the low status tasks that are needed while men take on those with status and influence. Indeed, this trend may have been exacerbated by austerity. Sarah Marie Hall and Eleanor Jupp argue that under austerity women’s activism has increasingly centred on maintaining the home, neighbourhood and community in the face of growing poverty and service cuts. Low status work involved in maintaining community – such as requesting environmental services - can be thought of as a ‘third shift’ in women’s work, adding to the first and second shifts of paid and domestic labour.

Responding to requests for service – the impact of austerity

The time taken by the council to respond to requests for environmental services increased substantially over the nine years of austerity. Figure 3 shows that response times increased from less than a day in 2010 to between five and six days in the period 2015-2018. The figure also shows that while there was no difference in response times between more and less affluent neighbourhoods at the outset of austerity, a difference did emerge as cuts progressed. 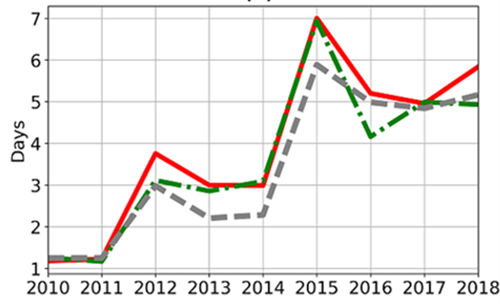 We also calculated the percentage of all response times that took longer than the median, identifying ‘delayed action times’. This revealed that since 2011, delayed action times were consistently more prevalent in deprived neighbourhoods, although in the later years they were also a feature of the least deprived areas.

Reassuringly, there was no difference in response times to requests from men and women. For this to have been possible, operational staff would have needed to know the gender of the person requesting the service and this information isn’t routinely passed on – perhaps an example of when ‘gender blind data’ can be useful!

However, when we only look at response times to requests made by women, women in deprived areas were much more likely to experience delayed action times than better off women. In fact, these women are the most likely of all groups (by gender or deprivation) to experience a delay.

It seems that austerity cuts created an increased demand for top-up, reactive, environmental services in all kinds of neighbourhoods in North Lanarkshire. Workforce cuts have impacted the Council’s capacity to respond quickly to such requests – it is worth emphasising that responses tended to be within a single day back in 2010. The Council’s CRM database is a rich resource that can be exploited to reveal small - but important - differential impacts of budget cuts; on people living in more disadvantaged neighbourhoods and women in particular. By making women visible in the data, we have revealed a third working shift undertaken disproportionately by such women - work previously done routinely by council employees, funded from collective taxation.

Professor Annette Hastings is a Co-I on the Administrative big data and unequal access to public services project at the Urban Big Data Centre. Annette's research focuses broadly on issues of inequality within changing cities.