Glasgow City Council will be publishing ambitious new transport strategies this year. These strategies will provide the framework for significantly increasing the number of journeys in the city done by walking, wheeling, or cycling.

Building infrastructure to enable such active travel by all ages and abilities improves health outcomes, tackles transport inequities, and can even reduce crime, as well as providing a neat way to get around.

One project in Dennistoun in the east end of the city claims to be “Glasgow’s first Low Traffic Neighbourhood”. However, in this blog, I will show how Glasgow’s post-war developments have a rich history of liveable neighbourhood developments around the city.

Issues created by a transport system that favours vehicle ownership can be seen in Glasgow where up to 46% of households do not have access to a car, which rises to 57% of households renting privately and 71% of households in the social sector. Focussing on driving private vehicles for transport in a city fails these households. Whereas making active travel easier and safer improves access to local shops, services, and public transport for all. 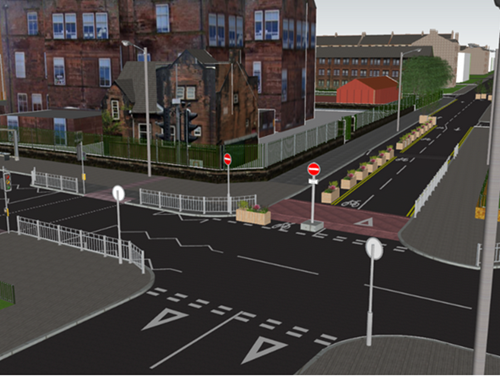 The image above from Glasgow City Council, shows an impression of the latest neighbourhood changes involving widened footways and new contraflow cycleways.

In 1965, Glasgow Published “A Highways Plan for Glasgow”, which laid the framework for the motorway and expressway network that we see in the city today. Although much of the proposed network was not built, the part of the plan with which people in Glasgow are most familiar is, of course, the motorways running through the city.

If you dig into the motorway plans (which Glasgow Motorway Archive do very diligently), you can find references to engineers’ worries about induced demand. Induced demand is when the construction of a new road leads to significantly increased traffic levels, often above what was expected. The planners and engineers at the time recognised that, without careful planning and implementation, the induced traffic demand could swamp streets surrounding motorway access points in the city.

Woodlands is an area of Glasgow that shows good examples of what the planners and engineers did to properly manage traffic with the construction of a nearby urban motorway. The streets were classified according to their function and any local road was closed to through traffic. This ensured that the streets designed to accommodate significant traffic flows could function as designed while allowing most streets to have such low traffic levels that they were safe and pleasant walking environments, or perhaps playing spaces for children. The streets in this area are largely still laid out according to this framework, although there are some changes such as Woodlands Drive and West Princes Street being closed to through traffic. 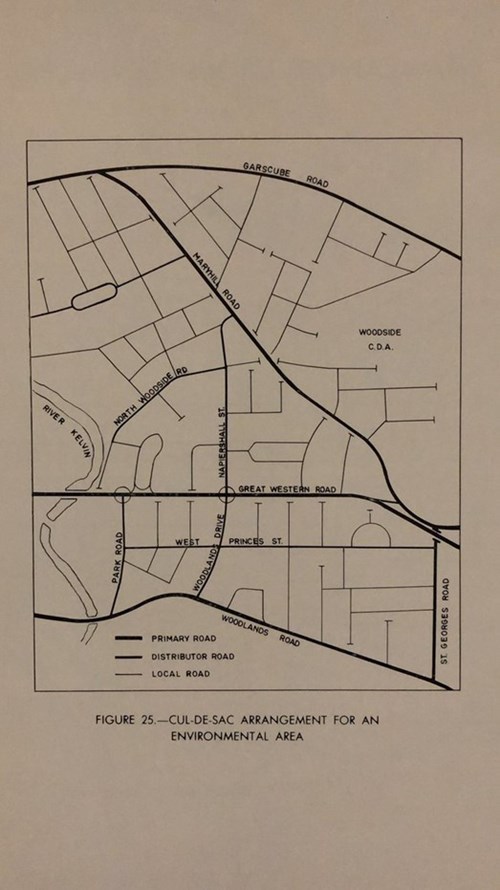 There are advantages for the pedestrian using the primary road network from these changes. Great Western Road boasts a 550m commercial stretch, which you can walk along and enjoy without ever having to cross one side street. This likely positively contributes to the large footfall that the shops, pubs, cafes and restaurants can experience.

The image above taken from Google Street View shows two local roads that do not have vehicle access from the primary road. Pedestrians are free to continue walking without fear of crossing the street. Modern treatments would call for cycle access on these roads to create a permeable neighbourhood cycle network.

The high level of traffic on the primary road network effectively creates barriers (particularly where they are multi-lane), increasing severance between neighbourhoods and diminishing the walkability of the city. The engineers at the time proposed that underpasses would solve this problem to “improve safety and traffic flow” as well as “elimination of commercial street frontage” to “develop shopping centres”. Such a plan was partially enacted in the south of Glasgow on Kilmarnock Road with Shawlands Arcade. Such removal of active commercial street frontages actually reduces the walkability of city streets by creating unlively areas that are not pleasant to walk along.

The image above taken from Google Street View shows the plans for Glasgow’s high streets where shop frontage would be removed and replaced with shopping arcades as in the left of this image. The right of the image shows the classic Glasgow Tenement high street set up.

Further west in Partick, Glasgow, another plan was put in place around 1990. This called for significant remodelling of the local road network, which would create a more residential road surface with street bricks, protected footways with bollards, increased tree cover, and improved managed parking.

The two Google Street View images below are from the same spot on Ellie Street in Partick. The first faces North and shows a classic British access road with black asphalt as the surface on carriageway and footway. The second faces south and shows the positive impact on street character of street bricks, lightly coloured footway paving, extra footway space protected by bollards, and additional trees.

Such low traffic and landscaping improvements undoubtedly improve the environment for pedestrians. However, any change on our streets is always disruptive. Although these changes can be unpopular at first, these projects are almost always popular once they are established. For anyone involved in implementing or campaigning for such Liveable Neighbourhoods then Transport for All’s Pave The Way report is essential reading as it describes the impacts of such changes, and the planning process, on different disabled people.

Woodland and Partick are just two examples in Glasgow of such past Liveable Neighbourhood-style developments on existing streets. You can find them all over the city in Maryhill, Govan, Govanhill, Langside (which has since been opened up to cycles), Hyndland, and even 1960s-era examples from Dennistoun. It transpires that “Glasgow’s first LTN” is just a continuation of what was started 60 years ago in the city.