The use of artificial intelligence (AI) methods in processing CCTV images and video has received a lot of media attention recently. The potential insights offered by CCTV sensor networks can transform how we build and maintain cleaner, healthier, fairer and more prosperous cities. Despite this, many groups have genuine concerns about this type of technology and the civil liberties implications.

For responsible researchers, any data collection and processing approaches must reflect and reinforce the freedom of individuals and legitimate expectations of privacy. Effectively balancing these privacy concerns with data utility is now a critical part of social data science.

Data collected from CCTV camera networks has the potential to reveal a great deal about the environments within which they operate. This explains the usefulness of such sources to researchers, planners and statisticians, but also accounts for the unease with which people sometimes view them. If approached in the right way, the processing of CCTV images using new methods has several benign and socially valuable functions as well as economic advantages. A city’s CCTV system is a ready-made sensor network, largely unused for much of the day and often only coming into play in the detection and prevention of crime. There is an opportunity to use this untapped resource to provide much-needed information in a variety of areas if the associated risks and concerns can be effectively mitigated. The Urban Big Data Centre is working with Glasgow City Council to explore the use of AI technology to identify objects in still images for numerous purposes, with privacy protection a key requirement.

One possible use being explored is to detect and count pedestrians as objects in images as a measure of pedestrian activity. Data on the numbers of people walking is important for planners when trying to understand the impact of new infrastructure on active travel. Traditionally when this data is required it has been gathered by researchers either directly counting people or, in the case of GCC’s annual cordon count, manually counting people in images. These methods are expensive, requiring many person-hours to gather the data, and limited by how often these data can be collected.

The UBDC and GCC are currently piloting a system that uses images taken from three cameras in the city centre at designated positions every 15 minutes throughout the day. The images are then batch processed through software, developed by UBDC data scientists, which counts the people detected in each image. This software records the following information in an excel sheet: the number of pedestrians; the time the picture is taken; and camera location. Each object detected is given a percentage probability that it represents a person, and the threshold at which the object is counted as a person can be varied.

Crucially, these methods rely on algorithms simply counting objects within images that exhibit certain features. Objects resembling the shape of people are counted but never identified, tracked or monitored. The outputs of the software are simple numeric totals and confidence scores; no visual features or identifiable information ever leaves the secure monitoring environment. Figure 1 shows an example of a processed image taken within UBDC’s offices. 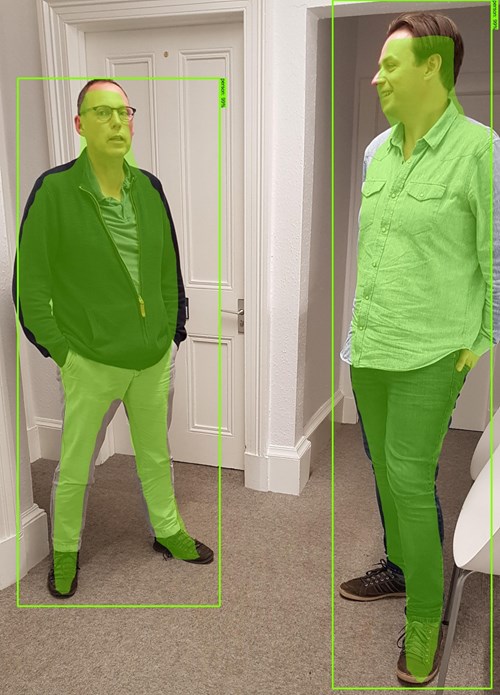 The software can also identify other objects, like bicycles and a range of vehicles, so other modes of traffic could be counted. AI methods also allow for ongoing identification development, so it may be possible to use images to help to manage services such as identifying where bins are overflowing or where street lighting is no longer working.

There are practical issues to overcome, such as ensuring that cameras are not diverted to the home position to take a photo when in use by an operator, but there are over 400 cameras in the Glasgow City Council area with significant potential for collecting these data. The work is in the early stages but has considerable potential if we can ensure it works seamlessly alongside CCTVs main function: to help keep people and properties safe.