On September 28-30, 2015, a delegation from the PASCAL International Learning Observatory attended the UNESCO Second International Conference on Learning Cities in Mexico City. The delegation included Dr Catherine Lido, a research associate in education at the Urban Big Data Centre, University of Glasgow. She was accompanied by Dr Leone Wheeler, PASCAL Board member and Content Editor (support in part by the Australian Learning Communities Network), as well as Francisco Javier Carrillo, head of the Knowledge Societies Research Group at the Tecnológico de Monterrey, México.

The delegation was sent to reinforce the collaborative relationship between UNESCO and PASCAL, initially forged through the efforts of Professor Mike Osborne and Peter Kearns and UNESCO Institute of Lifelong Learning members, Mr Arne Carlsen and Raul Valdes-Cotera.

Dr Catherine Lido presented the work of the Urban Big Data Centre in Glasgow, in particular operationalising Learning City Indicators through the integrated Multimedia City Data Project (iMCD).  Dr Catherine Lido and Dr Leone Wheeler were invited to take on the role of Rapporteurs; Dr Lido for the Mayors’ Forum: Lifelong learning for all is our cities’ future. and Dr Wheeler for the plenary session: Implementing the Key Features for Sustainable Learning Cities.

A highlight of the conference was the launch of the new ‘Learning City Awards’ granted to the first 12 case study learning cities – for implementing the Key Features of Learning Cities.  The case studies are documented in the new UNESCO publication Unlocking the Potential of Urban Communities. Dr Wheeler was given an honorary membership given by the City of Melton delegation, including its Mayor Cr Sophie Ramsay. Beijing has now passed the Learning Cities baton to México City, which will work to implement the México Declaration in preparation for the next UNESCO International Learning Cities conference in two years’ time. México City is taking this role with great enthusiasm. The Mayor of México City, Mr Miguel Angel Mancera Espinosa, said that there is now an obligation to move this agenda forward. 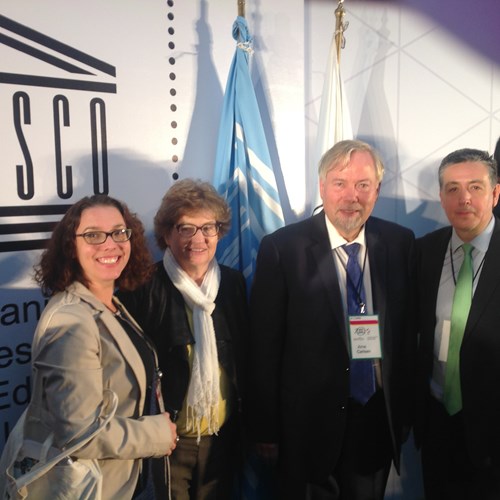