Understanding the impacts of COVID-19 on the Glasgow City Region economy – gauging impacts through big data?

In this blog, which is reposted from the Policy Scotland website, Dr David Waite from Policy Scotland and UBDC's Dr David McArthur examine the economic impacts of COVID-19 in the Glasgow City Region & explore the potential for using local big data to fill the gaps in our understanding.

COVID-19 is a public health emergency with economic implications presenting few precedents. To minimise stresses on health services, the economy has effectively been shut down, whilst to avoid widespread “economic scar tissue” emerging, that is, long-term damage to the economy – massive fiscal responses have been put in place to support firms and workers. Suddenly the state looms large in the economy in a very big way.

The outlook for the UK economy in the short term is bleak. Office for Budget Responsibility (OBR) projections point to a GDP dip of 35% (for Q2 2020), with rising public debt. GDP projections from the Scottish Government suggest a 33% dip. Of course, such projections reflect more speculation than anything certain at this point. Impacts on the labour market will, in many ways, hinge on the efficacy of the policy responses. To date, however, we can observe 1.4 million claimants for Universal Credit in the four weeks of the crisis to 20 April. Searches for “universal credit” on Google reached an all-time high just prior to the lockdown. 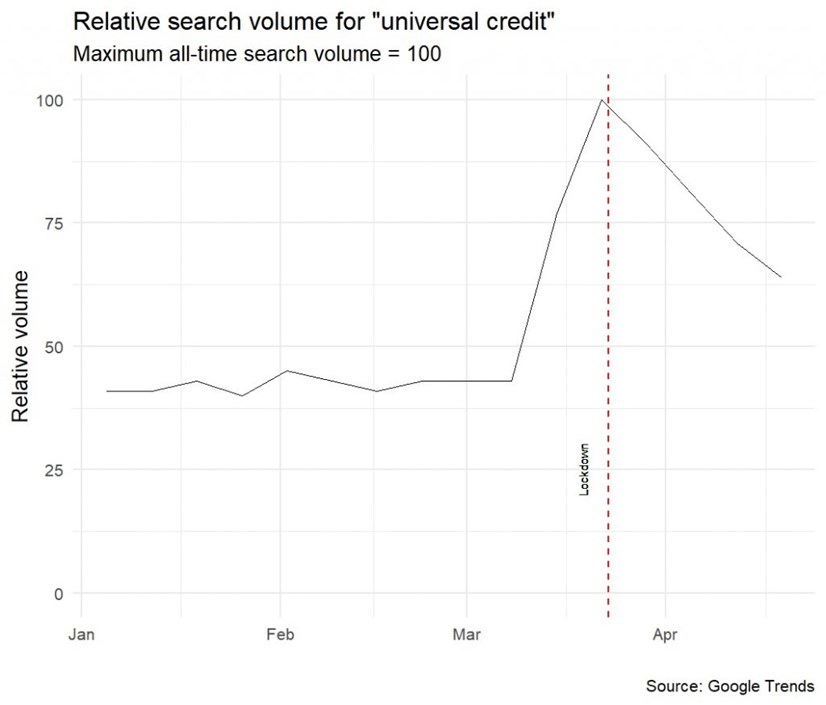 Beyond the aggregate level, clear fault lines in the UK’s economy can be pointed to. First, there is cause to believe that younger participants in the labour market may be the most exposed to the downturn given their sectoral and wage profiles; indeed, what are the prospects now for new graduates looking to enter into the labour market?; others, meanwhile, suggest shocks may be more accentuated for female workers (Queisser et al and Hastings). Office for National Statistics data also suggests that the ability to work from home favours those in higher occupational categories and those boasting higher skills. Additionally, evidence is reasonably clear that some of the essential activities ongoing at the moment – such as social care – rely on a workforce exhibiting low wages and stark precarity. As the US philosopher Michael Sandel has noted in the New York Times recently:

Beyond thanking them for their service, we should reconfigure our economy and society to accord such workers the compensation and recognition that reflects the true value of their contributions — not only in an emergency but in our everyday lives. Michael J. Sandel
The New York Times, 13 April 2020

We also need to ask questions about how the economic consequences will play out sub-nationally. With a concern for the Glasgow City Region – and reminded of past evidence which showed a weaker (relative) resilience to economic shocks (Champion and Townsend (subscription required) and Clarke/Resolution Foundation) – what implications will COVID-19 have in this context? Here we run into data constraints quickly. As a starting point, however, one way to consider urban economy impacts is to use Michael Storper’s broad framing of the urban growth system as hinging on the interactions between specialisations, human capital and institutions.

In terms of the former, initial analyses point to forms of sectoral exposure for local economies, and with suggestions about how sectors will be differentially impacted by the lockdown. For instance, in some areas such as leisure and tourism activities will drop significantly. As an example, the number of reviews being posted in Airbnb has dropped sharply in both Glasgow and Edinburgh, indicating a potential collapse in revenue in the tourism industry. 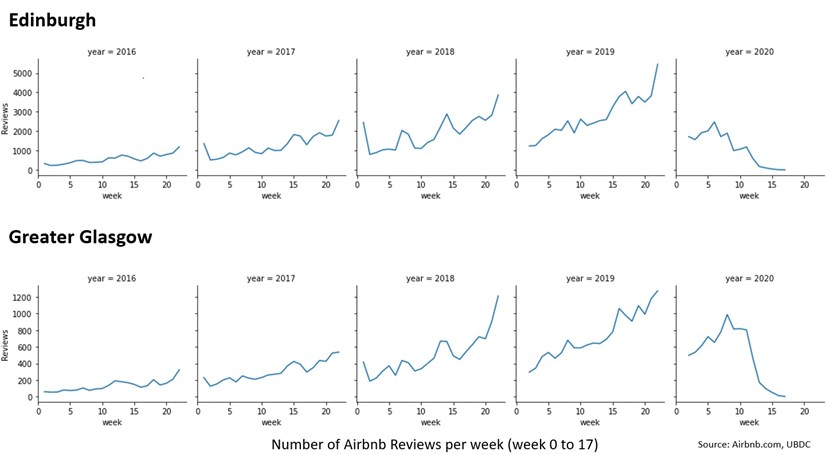 Source: Airbnb website. Plotted by UBDC. Permission to use for research purposes only.

Approaches taken by the Centre for Cities (which also factors in export orientations) and the Centre for Progressive Policy, suggest that Glasgow may follow similar trajectories to UK-wide projections. Questions here about the ability of workers to move from impacted functions or industries, to less impacted or growing functions and industries are also pertinent. Glasgow is also a city with a notable higher education sector, so the challenges facing this sector, particularly in terms of future admissions, will be an issue of wider regional consequence.

In terms of human capital, we are aware of anecdotal evidence from Scottish Enterprise that some apprentices have been furloughed, whilst questions about the prospects of some self-employed in the labour market can be pointed to. Across the eight local authorities in the City Region, Annual Population Survey data suggests shares of self-employment are above and below the Scottish average, however, see Overman’s cautionary stance about what relative shares may tell us. We also know that dislocations from the labour market, for young people in particular, can lead to an individual’s labour market prospects being scarred (subscription required). UBDC colleagues are currently processing data from employment search engines, which should provide interesting perspectives on the nature of the recovery. We may also want to consider impacts on personal wellbeing, which recent ONS data from the Opinions and Lifestyle Survey gives some view on (for the UK).

In terms of institutions, if we conceive of this broadly, we turn to consider the government responses to mitigate the crisis but also considerations regarding the social fabric that will emerge at the end of the crisis. That is, important questions may be posed about what social institutions will be in place to support those hit by the crisis; indeed, what capacity will there be in the third sector to support greater need? Additionally, how will housing market challenges emerge? The Resolution Foundation points to the greater tendency for private renters to work in shutdown sectors compared with home owners, for example. For the latter group, what will be the impact of mortgage relief measures? Across the policy spectrum, the state and the market are being reconfigured in striking new ways in just a matter of weeks.

In general though, despite the aforementioned areas being critical to our understand of how urban economies work, data on local contexts is unfortunately constrained (and often lagged). In looking to address this, we need to distinguish what data may expose in terms of: one, what is the nature of the shock and the drop-offs in economic activities; and, two, what is it telling us about the economic recovery after public health measures are taken away or relaxed. That is, viewing the urban economy under lockdown, and viewing the urban economy coming out of lockdown.

If agglomeration economies are characterised, in normal times, by the velocity of interactions within dense or large spaces, transport data is clearly one lens to look through to observe impacts. Here we can turn to a number of sources. First Google mobility reports, drawn out for local authority areas, gives an indication of transport for various uses/purposes, such as “retail and recreation” and “workplace”. The April 11 report for Glasgow City shows a sharp decline in activity relative to a baseline week in January (-84% and -61% respectively). An interesting issue here, will be to what extent such data gives us a picture of the recovery; will we return back to pre-crisis levels?

Counts derived from CCTV cameras in the city centre of Glasgow have shown a sharp drop in both pedestrians and cars. There has, however, been a slight tendency in the past week for the number of cars to increase. 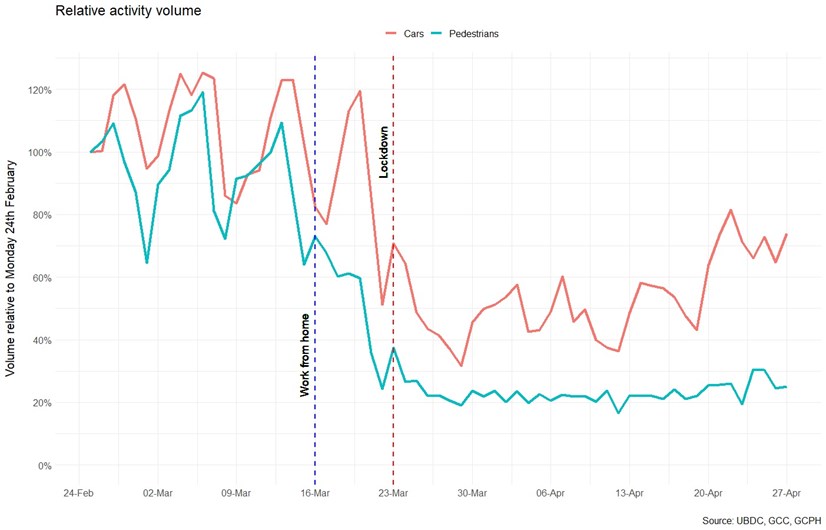 Data from sixty traffic sensors (SCOOT loops) around Glasgow also shows a sharp drop in traffic on the roads. 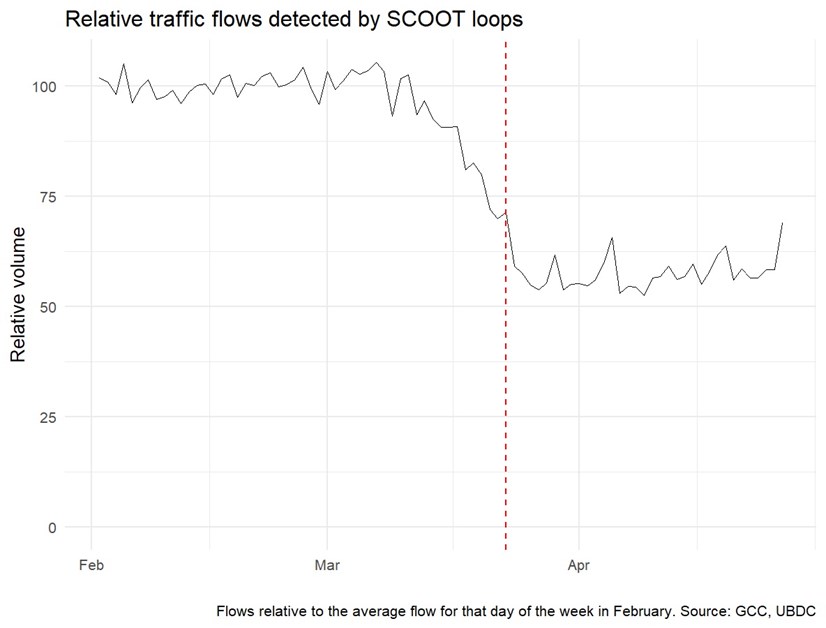 Urban economies are also marked by their external connections, and transport flows in and out of airports have been substantially impacted. As the COVID-19 outbreak took hold, Edinburgh airport notably mentioned going months without passengers; indeed recently released data (March) from the Civil Aviation Authority on passenger movements at the airport show sharp declines. The state of the aviation industry that emerges from the lockdown, and how airports such as Glasgow and Edinburgh fare in sustaining routes to key commercial locations (domestically and internationally) among other places, will no doubt be important for the City Region’s economic recovery.

An interesting question for considering the trajectories of the urban economy is the use of air pollution data. It has been widely reported, from many contexts, that air pollution has fallen as a result of lockdown measures. 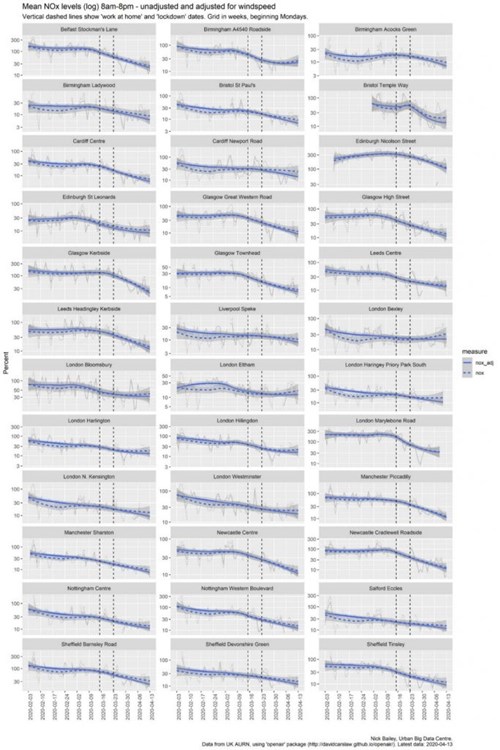 On the one hand, air pollution data gives us a lens to consider the resumption of activity (is activity getting back to the way it was, in essence?). However, this is different from the normative question of whether we should hope to see the levels of pollution we were once seeing. If we are interested, indeed, in liveable cities, air pollution reflects a critical issue. Broader debates emerging about the need for a green stimulus to support the COVID-19 response come in here.

In summary, the Glasgow City Region economy is an important lens to consider the impacts of the COVID-19 lockdown and recovery. It is a context that exhibits challenges both inter- and intra-regionally. If the UK Government and the Scottish Government seek to advance a ‘levelling up’ agenda, policies to address the needs of different places will be required as we pull through this crisis. To inform these responses, we may usefully develop richer local data.

Tracking lockdown, supporting recovery: the potential and the pitfalls of big data Blog
Using crowdsourced data to monitor trends in cycling during the lockdown Blog