Invisible Fissures in the Glasgow Housing Market: Finding a neighbourhood that feels like home

Invisible Fissures in the Glasgow Housing Market: Finding a neighbourhood that feels like home

The Urban Big Data Centre’s University of Sheffield team, in collaboration with University of Glasgow colleagues and others, are investigating a range of issues around diverse populations within cities, and what their neighbourhoods and movements mean for urban life and urban economies.

They’ve been examining the usefulness of big data on these topics, and how to visualise the results in a useful way. This blog shows how data might be used to help understand different neighbourhoods in a single city, and how that might assist people determine which neighbourhood might suit them best. The work described here uses Glasgow Solicitors’ Property Centre (GSPC) data with Scottish Index of Multiple Deprivation (SIMD) data. We’ll be publishing some interactive versions of the maps below in the near future, so watch this space. And for a fascinating related academic paper using the same data, see: Is the housing market blind to religion? A perceived substitutability approach to homophily and social integration, published this year in Urban Studies.

The Subtle Ingredients of Neighbourhood Ambience

Have you ever thought about where your neighbourhood starts and the next one begins, and how others’ perceptions of these invisible demarcations compare with your own? Subtle differences in the style of house, the sort of people that live there, the clothes they wear, the cars they drive, the style of curtains, the kind of flowers in the garden, the decor you can see through the windows; all these subtle hints and signals combine to create that intangible thing we call neighbourhood ambience. In some areas, of course, those transitions from one neighbourhood to another are more than just a thing of curiosity. They denote very real borders between territories, and knowing whose territory you're in could be a matter of life and death or at least determine whether you will be shunned or welcomed.

Deciding What Neighbourhood to Move To

For home purchasers making one of the biggest financial and personal decisions of their lives, these subtle differences could prove vital in determining whether they will feel at home in their new family nest. For most of us there will, we hope, be more than one welcoming neighbourhood to choose from. What complicates things, of course, is that places we would perceive to be similar or equivalent in terms of their ambience and amenities aren’t necessarily near each other – it is possible that they are clustered in a particular area but could equally be scattered around the city. This complicates the search process considerably as trying to find pockets of dwellings that meet your intangible criteria is that much harder if they are scattered across the vast urban landscape. Needles and haystacks come to mind…

So, in the age of big data, is there a way of identifying which areas may be close substitutes? This raises an interesting philosophical question: to what extent are neighbourhoods that we personally perceive to be close substitutes, also perceived to be close substitutes by others? We are all different, after all, with different backgrounds, tastes, beliefs, fears, prejudices, and worldviews. Perhaps we each read the same “signals” in different ways? Or perhaps we each see different signals – some of us will be blind to signals that others are especially alert to. In the aggregate, will there be any measurable differences in the perceived substitutability of neighbourhoods in a large city like Glasgow?

You might think this is an impossible question to answer given the quirkiness of individual tastes, and all the subtle aspects of neighbourhoods listed above. It's certainly something we are unlikely to be able to measure with absolute precision. Nevertheless, we think there is a possible route into tackling this conundrum and it starts with a beguilingly simple bit of theory from textbook economics. This theory says that if two goods are close substitutes then an increase in the price of one will lead to an increase in demand for the other as people switch consumption to the cheaper alternative. Suppose, for example, butter and margarine are perceived to be close substitutes. If the price of butter goes up, we would expect all but the most pernickety of butter-buyers to purchase margarine instead. We might then expect the price of margarine to go up, especially if the increase in demand cannot immediately and easily be met by suppliers of margarine. More generally, we would expect the prices of close substitutes to move in tandem.

Searching for Substitutes in No Mean City

Applying this approach, we computed “cross price elasticities” – the measure used by economists to determine how changes in the price of one good responds to changes in the price of another good – for house prices in 10,000 postcodes in Glasgow. This gave us a dataset of a hundred million possible substitutability connections between postcodes from which we can then plot the “substitutability map” for each and every postcode. Such a map displays which neighbourhoods are considered close substitutes for the postcode in question. The substitutability map for your postcode, for example, would reveal which parts of the city are considered by the housing market to be close substitutes to your own. It could also uncover hidden fissures in substitutability space -- i.e. invisible boundaries where we see a sudden fall in perceived substitutability. Such fissures might be important as they may reveal festering tensions between different ethnic communities or lingering stigma associated with former social housing estates, for example. Or it might be that we all view the world in such different ways that the aggregation of individual preferences -- which is what house price movements essentially capture -- reveal no discernible patterns, just a fog of noisy data.

So, what did we find for this "no mean city"? Do we find clear patterns of substitutability as perceived by the housing market as a whole? Are there fissures and boundaries or just gradual blending in perceived substitutability? And do substitutable neighbourhoods tend to be adjacent to each other or can they be dispersed around the city? To answer these questions we had to find a way of visualising the mass of substitutability maps -- all ten thousand of them -- in a way that would allow us to identify these patterns.

So we developed an interactive map where close substitutes for a particular neighbourhood glow like Christmas tree lights. Screenshots of this interactive map are shown below. The large green dot highlights which postcode the substitutability map is being plotted for. Users can move this dot around, and as they do, postcodes considered to be close substitutes for the selected location light up across the city.

We show the following two maps because they reveal a particularly interesting feature – what we think might be a hidden fissure in substitutability. The maps are plotted for two postcodes either side of the Forth & Clyde Canal. When we shift the green dot from postcode A just North of the Canal (Map 1) to postcode B just South of the Canal (Map 2) we see how very different parts of the city light up as close substitutes. This radical change in the substitutability map over such a short distance is truly remarkable. It suggests that the postcodes A and B are considered to be in entirely different submarkets, even though they are right next to each other. So our substitutability measure seems to reveal a hidden frontier in the housing market, which may reflect innocuous differences such as different house types or may reveal something more troubling such as deep social divisions.

The maps are also potentially useful to house buyers trying to identify those pockets of neighbourhoods that are close substitutes for their preferred locale – all you need to do is move the green dot to an area you know you feel at home in and the magic of big data will illuminate all the neighbourhoods across the city that the housing market considers to be close substitutes. 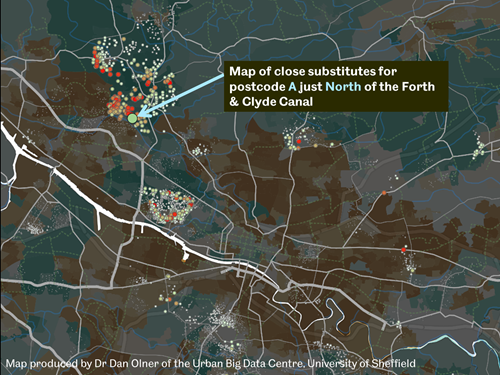 Figure 2: Map showing that an area very near Bearsden but south of the canal has a completely different set of similar neighbourhoods. 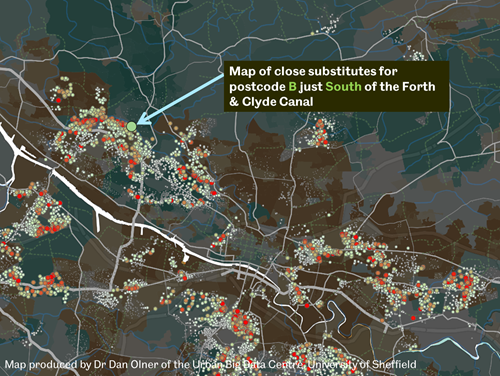 Key to map colours and dot sizes:
Map colours: brown areas are more deprived areas, blue are less deprived. (Based on the Scottish Index of Multiple Deprivation.)
Map circles: larger red circles show postcodes that are the most substitutable with the selected one (the large green dot highlighted with the arrow.) These circles become smaller and whiter as postcodes become less substitutable.

We hope to make the interface freely available in the near future, so watch this space! Meanwhile, if you have any ideas about what might be the cause of the fissure in the substitutability continuum shown in the maps below then we'd love to hear from you. What was it like to grow up either side of the Forth and Clyde Canal? Do you have any photos or stories to tell illustrating the contrasting lifestyles of the two communities? Or perhaps you think our fancy map is a load of old nonsense! In which case we'd still like to hear from you, especially if you can help us find alternative explanations for these curious patterns in the data.